At the end of July, 2015 a good friend of mine posted a photo of her 2 daughters and 2 nieces standing arm and arm facing the water.  I, along with so many other people, instantly fell in love with the photo and asked if I could try to paint the girls.  I decided to paint a large canvas (16×20) on the vertical rather than horizontal, as indicated in the photo below.  Painting it vertically, enabled me to place the girls as the focus of the painting and using a large canvas conveyed the large body of water.  There were a lot of things that were challenging for me.  The first was conquering the multitude of color combinations that make up flesh tones.  Numerous color combinations came together to form their regular skin tone, their skin tone with shadow and then their sunlit skin tone.  The second major challenge was creating the arms– for some reason the legs were easier, go figure!  At one point the arms looked a lot like the Stretch Armstrong toy and I spent a lot of time making them look more … human.  The easiest parts were their hair and the water.

I had finished the girls enough that on September 19th I put them in my booth at the Londonderry Arts Festival.   I received many positive comments on this painting but my favorite one was when a women asked,  “Do they love each other as much in real life?” 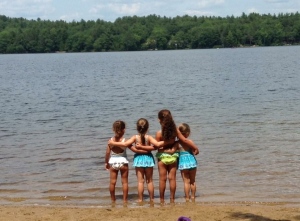 View all posts by MichelleCoteFontaine

One thought on “The Little Ladies of Summer”